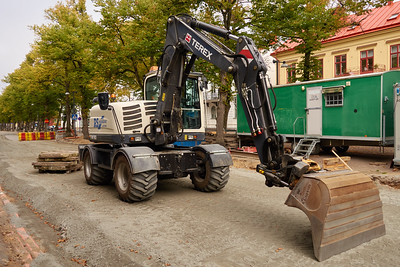 They are too big and too heavy to be driven on the roads. Excavators are designed for construction sites and other off-road locations.

If you need to move an excavator from one job site to another, you will need to transport it on a flatbed truck or trailer.

The best way to determine the legality of excavators in your state is to contact your local Department of Transportation.

And there's already a DOT guidance about this matter - construction equipment doesn't qualify as "motor vehicle" or "commercial motor vehicle" and therefore should not be used for transportation purposes.

It is also suggested to check local laws. Some states have laws that allow excavators to be driven on the road, depending on some restrictions, while other states have its own laws that ban excavators from being operated on public roads.

Even the excavator has tracks or wheels, this equipment is not street legal. Technically, they can be driven on the street for the purpose of transporting it from job site to another in short distance. When doing such activity, traffic controllers or standby men should be present to guide flow of traffic while the equipment is travelling.

Even the operator of the equipment has a valid driver's license or experienced operator and the equipment is insured and has the appropriate accessories, the excavator can't still be considered as street legal.

If you're asking, how about those wheeled excavators that can travel up to 60mph. Can they be street legal? Those models of equipment don't have the features the law would require to operate it on public roads and they do have restrictions when travelling on the roads and therefore they can't be classified as "street legal."

Excavators can't be street legal. This is because they are not designed to meet the safety standards required for road vehicles. Excavators are also not typically equipped with the necessary lighting and signage required for road vehicles. It is important to check with your local authorities to determine whether an excavator can be driven on public roads in your area for the purpose of transporting from job site to another.

The laws restricts or allows travelling this construction equipment on the road, laws vary depending on the locality and jurisdiction. If such activity is allowed, here are some safety precautions to keep in mind:

Requirements for Operators and Equipment

There are a few safety requirements that are specific to excavators when they are driven on the roads. The operator must have a valid driver's license with a clean record and properly trained in doing such an activity.

Common problems When the Equipment is Driven on the Street

When travelling, overhead power lines post hazards; It is necessary to determine the height of the equipment and survey the road of travel if there are electric cables that can snag to the equipment.

The Equipment Must Be Insured When Doing This Activity

When it comes to construction, there are many different vehicles that can be used in order to get the job done. One type of vehicle that is commonly used in construction is an excavator. Excavators are very versatile and can be used for a variety of tasks. However, before an excavator can be used on a public road, it must be insured.

To Make a Conclusion

Again, the law on you locality dictates whether the excavator can be operated on public roads. You need to check with your local authority about this matter, so that you would not get conflict with it. Commonly, a permit must be applied prior to commencing the activity.

You need to take extra precautions as well, you don't want receive hefty fines and penalties when an accident happens. Be sure the operator is certified and trained for this task, otherwise, you're putting the precious equipment in peril; the safety of others as well are at risk.